Thirty members of the Wharton and Penn Clubs of Boston and their guests gathered at the Old North Church on the warm evening of July 13 to learn about the history and preservation efforts at our nation’s oldest church and one of the most visited historic sites in the City of Boston. The evening included time for socializing, networking, enjoying appetizers and a refreshing glass of Prosecco.

The Reverend Steve Ayres, Executive Director of the Old North Foundation, addressed the group in the Washington Courtyard where guests learned about the plans the foundation has underway to restore the church and adjacent garden. Rev. Ayres noted that the last major renovation of the church took place in 1912. Participants learned about Old North’s history and plans to preserve the site, in preparation for the upcoming 250th birthday of the country in 2026 and the church’s 300th in 2023.

The group was invited into the church to learn more about a historic paint analysis project, which was conducted by Building Conservation Associates earlier this year. The study explored the many layers of paint and original color scheme of the church interior when the church was built in 1723. Findings revealed 20 winged cherubs painted by decorative painter John Gibbs in the 1730’s. The study will help determine what will likely be a more authentic colonial color scheme when the renovations begin in two years. A special “behind the scenes” tour of the church’s crypt and bell chamber followed Ayres’ talk.

As a result of the gathering, and in response to the Wharton Club mission to encourage community impact, a generous coupling the event has presented a challenge grant to Wharton and Penn alumni. They will match any donations from Wharton and Penn alumni toward the Old North Foundation capital campaign, up to a total of $25,000! The challenge grant is effective until December 31, 2016. If you would like to participate by making a contribution, please contact Nancy Csaplar, WG ‘82, Wharton Club VP of Community Service at Csaplar@comcast.net. 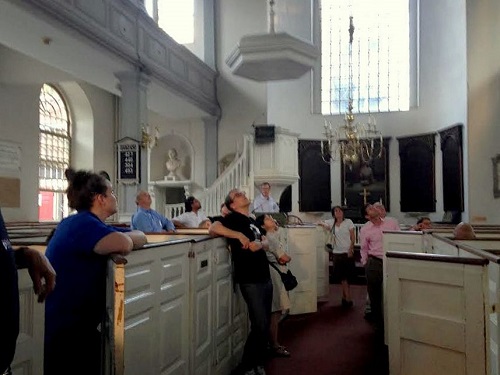 Above: Wharton and Penn Club members view a cherub that was revealed during the paint study for the preservation planning at Old North Church. 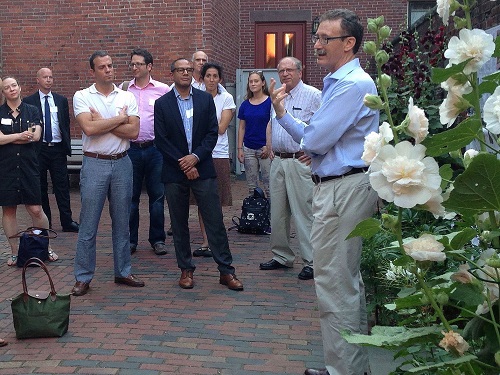