2016 Recipient of the Joseph B. Wharton Award

Peter Lynch is Vice Chairman of Fidelity Management & Research Company ­­ the investment advisor arm of Fidelity Investments ­­ and an Advisory Board Member of the Fidelity Funds. Mr. Lynch was portfolio manager of Fidelity Magellan Fund, which was the 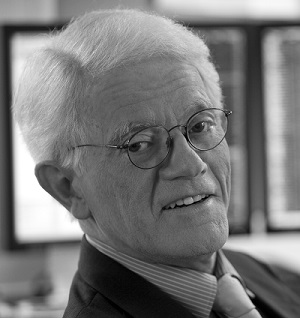 best performing fund in the world under his leadership from May 1977 to May 1990. When he took over Magellan Fund, it had $20 million in assets. By the time he retired from the fund, it had grown to over $14 billion in assets and had over a million shareholders. Magellan became the biggest fund in the world in 1983, and it continued to outperform all other funds for the next seven years.

Mr. Lynch joined Fidelity in 1969 as a research analyst and was later named director of research. During his tenure at Fidelity, he has served as a managing director of Fidelity Investments, an executive vice president and director of Fidelity Management & Research Company, and a leader of the growth equity group. He is the author of the bestseller, One Up on Wall Street, and Mr. Lynch went on to completed his second book in March 1993. This book, Beating The Street, remained No. 1 on The New York Times best­seller list for eight weeks. His books have been translated into several languages including Japanese, Swedish, Korean, German, Spanish and French, Polish, Hebrew, Portuguese and Vietnamese. In 1995, Mr. Lynch co­authored Learn to Earn, a beginner’s guide to the basics of investing and business.

Before joining Fidelity, Mr. Lynch served as lieutenant in the U.S. Army for two years.

Born in 1944, Mr. Lynch received a Bachelor of Science degree from Boston College in 1965 and an MBA from The Wharton School at the University of Pennsylvania in 1968. In 1994, he was named Outstanding Alumnus by The Wharton School. Mr. Lynch is a fellow with the American Academy of Arts and Sciences and a member and former director of the Boston Society of Security Analysts.

Mr. Lynch is actively involved with a large number of civic and not­for­profit organizations. He has been recognized with several awards for his efforts, including the National Catholic Education Association 1992 Seton Award, the Massachusetts Society for the Prevention of Cruelty to Children 1993 Family Award, and the 1997 United Way Bay Leadership Award. For more than twenty years he served as chairman of the Inner City Scholarship Fund, raising over $150 million in partial scholarships for children living in the inner city of Boston and attending Catholic schools. The ICSF continues to be his number one philanthropic endeavor.

Mr. Lynch is also the recipient of many professional awards. He was recognized in the Business Hall of Fame of both Fortune magazine and the television show Wall Street Week. Updated: 6­2016